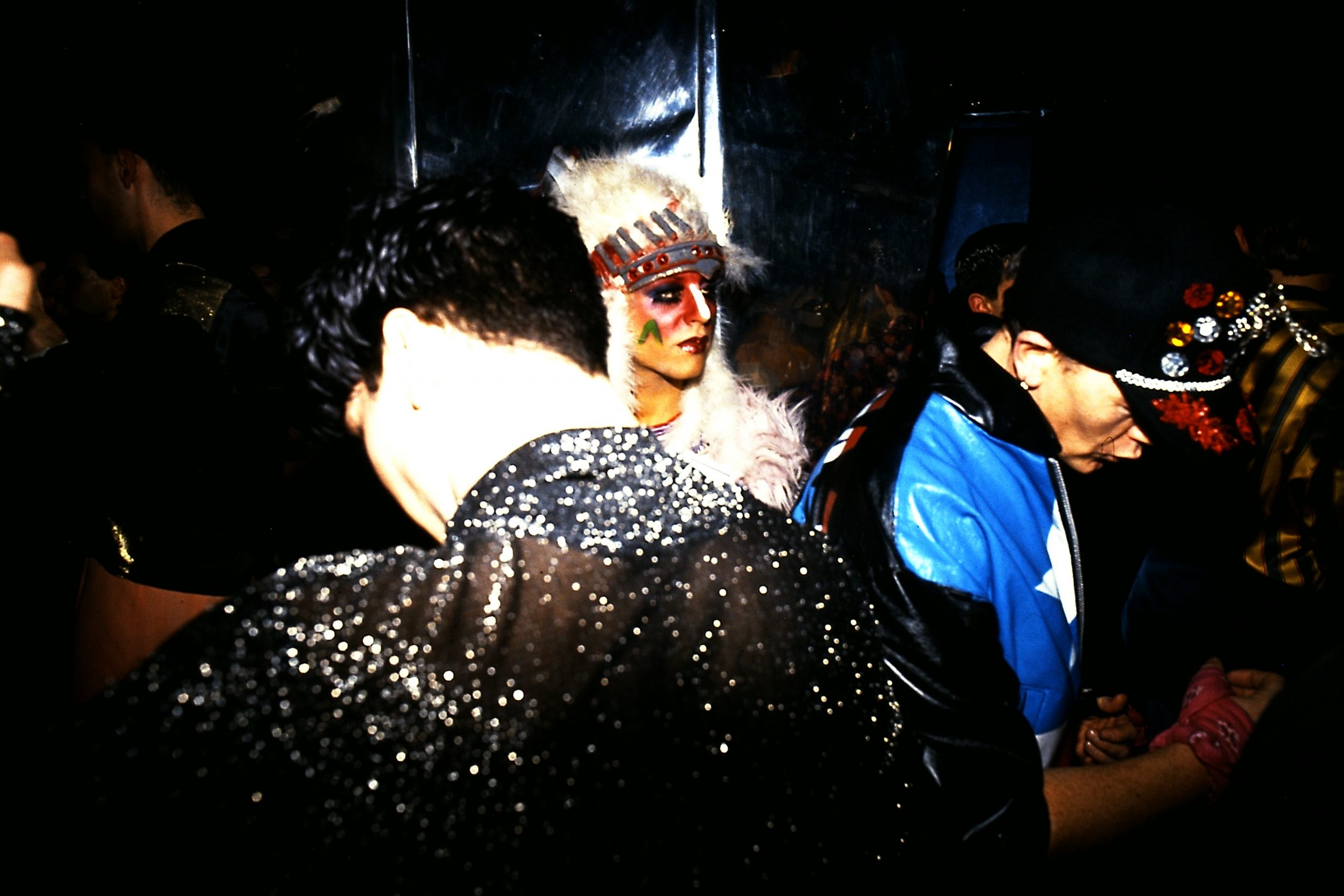 UNDERGROUND IN THE CULTURE CLUB

THE NICHE AND THE MASS, TWO OPPOSITE CONCEPTS

Two words are needed to briefly describe the whole of 1900, and in particular the decade of the 80s as a whole from the point of view of subcultures to better understand the placement that the Underground had: the last century was the historical period that saw the appearance of the most massive presence of ethnic, sexual and aesthetic minorities in history.

The youth creative currents that have developed around the mainstream are the result of mixes between cultures that have, over time, undermined the rules of belonging and self.tatus quo, making the company's conventions less rigid.

The boundaries of the Underground in the Club environment are defined starting from 1970 when it deviates from the main trend that belongs to the Hippy movement because the principles of its philosophy have changed.

The Underground of the 60s, in the description that Wikipedia also gives, is a political movement that expresses itself through various forms of communicative art at that time in expansion such as cinema and theater, with films and comedies, writing, with poems, comics, newspapers and magazines, together with the various souls of the hippy community, whose ideals, as is well known, refer to world peace, nuclear disarmament, non-violence, environmental protection. During that decade the hippy movement will experience its maximum expansion and media exposure to the point of being ready to be cleared of customs and affirm itself in the political world, but losing its intrinsic clandestine identity.

After Woodstock, in the 1970s, the Club Underground Culture it will turn, in New York, into a secret counter-culture movement where politics no longer exists.

In clubs, dance and politics are on the same wavelength and the movement linked to the club is more interested in the way of life and leisure, seeking and giving life to a new model of egalitarian, tolerant and positive community, abandoning politics conventional.

Many minorities, such as gays, straight women, blacks and latinos they found their safe haven in that environment without necessarily being "against" something.

All that was secret, not advertised was Underground. It had to be discovered exclusively by word of mouth, it had to be kept very confidential. You had to feel like you wanted to be part of something exclusive, as opposed to the mainstream and you had to defend it to keep your place safe.

Detached from popular dynamics, the movement, in the total absence of politics, grows free from compromise or forcing and will remain so everywhere until the end of the 1980s.

Underground means to remain, deliberately, not very visible. As long as it was possible, the imperative and the mood were that when you left the room you shouldn't talk too much about what had happened inside, you wouldn't tell where you had been or what you had done. Attending an underground event meant that no one would know anything about it except a small number of people and, whatever happened inside, it would be kept secret.

And the movement manages to keep itself secret; the clubs were located in basements or in places where no one would ever go. The first great difficulty remained that of identifying where the entrance was. "Qthese were the first parties where you had to meet someone to get in " * , you could not find it just asking around because no one knew and they were never advertised, there were no signs and often they were organized at the last moment just to maintain the rigid connotation of secrecy. They were never organized for profit, the entrance was on a voluntary offer, each participant was allowed to invite another person, there was no selection at the entrance and inside there was also a buffet corner where to drink and eat .

The centrality of dance - which is the heart of the Club - an expression of liberation and community participation, then the music that guides perceptive paths and is the basic tool of collective rituality in self-convened parties unrelated to profit or promotion logic, in atypical places and sets deliberately inspired by an almost mystical innocence, where the purpose of the party is, in fact, to dance.

The dark, minimal, collected environment symbolically recreates something that resembles the mother's womb where the constant rhythm can recall the beating heartbeat of the mother. Eyes closed and the strength of the low frequencies in the belly: the fulfillment of the tribal ritual that is dance.

Slaves to the rhythm when the lights go out only the music is important. As the individual movements became more intense, when they reach synergistic synergy the dance became a cathartic and liberating force.

The Club audience prefers to have fun, and the dark helps to dissolve the limitations and lose the sense of time. Nobody cares who the people around him are, you don't see sexuality, or how people are dressed. No one cares about sexuality and status. There is a continuous mix of different people and the parties conform to a spirit of socialization.

In the Club, the behaviors hitherto confined to a guilty marginalization become wonderful expressions of creativity and energy.

"Being a clubber therefore took on a very specific meaning, consisting in embracing an alternative lifestyle, sharing interests and passions, feeling part of an" underground "environment, with permeable and absolutely fluid borders, capable of transmitting the values of this movement, such as progress, freedom and emancipation, typical of a very open mind, tolerant and free of taboos. But not only.
Being a clubber also meant living for unbridled dancing and the dancefloor, attending the clubs assiduously, waiting for nothing more than to use these outlet valves to escape from everyday life and have fun together with other people, enjoying without any constraint the contextual moment at the party , in its "here and now". ***

The DJ of the underground club draws his inspiration from those who dance who in turn are stimulated by the music in an intimate and constant dialogue of continuous exchanges of mutual sensations. A way of making social and shared music.

There is very little visual material of the time because cameras were regarded as unwelcome intrusions. The parties were private and such had to remain in a continuous remarking of secrecy.

Starting from 1973 a wave of DJs began to undermine the stronghold of the Loft above all, trying to take possession of the soul of the Underground, which was always in the balance between protecting itself from overexposure and at the same time trying to change the world.

From the attempt to commercialize the spirit of the Underground begins a continuous overlap between the two ways of conceiving places for dancing: commercial and underground.

But it is always the commercial ones that draw from the Underground ones and the latter will increasingly struggle to maintain their initial integrity.

A forgotten underground world and parallel to that of the more commercial record where everything is upside down, uniqueness and creativity are the glue, the exact opposite of the mainstream disco world.

Although much of the dance phenomenon was expressed in an underground environment, it took years for the history of this world to first be recognized and then adequately appreciated, but still today, especially in all those who approach this world to work on it, this fundamental part history is not known and we tend to consider all places where there is a console and dance, especially mainstream discos, as "Clubs".

There are many reflections to be made on this concept which is the secret of the Club for all those who, in their approach, are already full of supposed knowledge.

The starting point is wrong: the main limit of the disco phenomenon and of the mainstream clubs that were - and are - places where people went and went to be seen, to have a drink, to pick up, in short, to do everything but dance in total and unbridled freedom.

These places conceived in this way, from the 1960s onwards, have the chronic inability to understand the underlying reasons, thereby condemning themselves to a quick end, while everything that had its roots in the Underground was more able to respond to deep needs, in a sense, timeless.

Although the Club model that has established itself is that of Garage Paradise, or Club Underground but for profit, the parties were disconnected from a logic of profit or promotion; it is exactly the opposite of how we know the discos of the circuit from the 90s onwards, a period that almost all of the insiders consider as "the golden years" having no conception that those years were already the drift of the movement, in a free and fast fall that led, at the threshold of the millennium, the distancing of customers now disgusted by the inflation of figures without any culture or professionalism that populated the environment, and the total lack of situations that had contained .

Club culture responds to a few, precise needs: to dance and give free rein to one's being, one's creativity, and to be at ease among others, in a context of deliberately not very visible secrecy.

The creativity of the public has been replaced by that of the staff; at the beginning maybe even beautiful, choreographic, enveloping and interesting, but gradually more and more banal and useless, thus leaving the total emptiness that no one is able to fill anymore, then the standardization of mainstream clubs that try to copy the Club environment not being able to succeed in any way for two fundamental reasons: culture and economy

Another big difference between Clubs and commercial discos is that in the Club there is no need for anyone to promote the evening or the music or the venue because in the Clubs there can be very few people and have a wonderful evening, while the others need to even a complex system that does not guarantee the actual success of the evening from the point of view of quality.

Today however, having destroyed this culture, it would be impossible to have a genuinely Underground audience. To overcome this problem, the clubs should however focus much more on quality music and push people to dance, not to make the catwalk with the opening at the table, in an attempt to create environments that leave strong sensations and emotions in the public fighting also the reduced ability to experience real events given by the advent of social networks.

As with all things it is very important to know really also the history of the Club; knowing and understanding it can only enrich and contribute significantly to change perspective compared to the general picture of the dance world.

The Underground Club will no longer exist, at least not soon, and hardly as "ugly, dirty and bad" as only real clubs have been. The important thing, however, will always be to have an audience that appreciates music, a DJ with culture, passion and vision, and a humble but enlightened manager.

In Italy the Underground Clubs that have been there can be counted on the fingers of one hand, but in general, whether they still exist or not, they keep a secret part, that part of magic, that soul that mainstream environments continue to pursue.

Underground is primarily a state of mind.